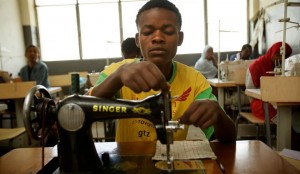 The goal of Retrak’s Vocational Training Program in Ethiopia is to prepare children, who have been living on the streets of Addis Ababa, to make the transition back to their home families and communities through long term resettlement programs.

In the first quarter of 2013 six boys have been enrolled in Vocational Training schools in Addis Ababa.  Retrak staff spent the early part of the year researching the best training schools to fit the interests and aspirations of the boys in our program.  Finances were taken into consideration, and staff found that school fees have increased considerably.

Therefore, after much research by Fekadu Daba, Retrak’s Deputy Country Director for Ethiopia, including visiting several possible schools, all six boys have been enrolled in a tailoring program, which seems to be the skills that are most employable at the moment. This will give them the opportunity to start a small business and to live independently.

Up until the Vocational Training program began last week, the boys have been active in Retrak’s other programs and have been working with Retrak social workers to overcome past trauma and determine what they wanted to do with their lives.

One of the children Retrak is assisting is Alemu (Alemu is the name we will us to protect the boy’s identity) who had been on the street for around 4 or 5 years. His parents had died and he had survived on the streets in Addis Ababa since he was 11 years old.  Alemu came to Retrak about 18 months ago hoping to escape from the depressing future he was facing. He had never been to school and felt there was no chance at all for him.  After counselling with the Retrak social workers and encouragement by the teachers to at least try to read and write, Alemu joined our literacy classes. He surprised himself and turned out to be a keen student and studiously practiced his letters and numbers.

He was encouraged to join night school at the local government school. He joined Grade 1 at 16 years old. He came to the Retrak program by day and participated in all the activities until 3pm. Then it was down to the bus station to work for a couple of hours to earn some cash by carrying people’s bags. By 5pm he would return, pick up his books and head to night school. After school he would return to the drop-in center, eat the dinner Retrak provided for him, and sleep the night.

This week he came rushing back from the school. Bursting through the door he proudly announced, “I’ve graduated!” At 16 years he had been promoted from Grade 1 to Grade 2. He was incredibly excited.

As a reward for his perseverance and hard work, we presented him with a T-shirt and sweater – he could hardly contain himself!

This year, with the help of Retrak, Alemu will continue his night school in Grade 2, and at the same time he is about to start daytime vocational training classes to learn how to become a barber.

Suddenly life is looking up and he can now excitedly look to a future away from the street, using his skills as a barber and continuing his education.