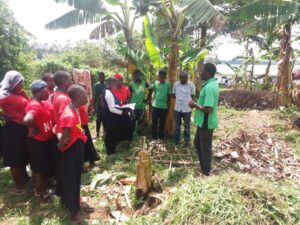 With the encouragement of the school’s administration and agriculture teacher Mr. Damulira Wilson, Wamukisa organized a training in organic farming methods for the members of PEAS Samling Nama Secondary School Agriculture Club. Nama village is located about five kilometers from Wamukisa’s primary area of operations in Kikondo village. A number of students whose families live in Kikondo attend PEAS Nama School. Among those students is Isaac, from the founding family of Wamukisa, who has grown up alongside the growth of FAITH gardening programs. During his first term at PEAS Nama School, Isaac began to talk with Mr. Damulira about organic farming.

In April, an agriculture club leadership committee including Isaac gathered twenty-two of their friends for the first club meeting. Through a grant to Wamukisa from Better Lives the club managed to have tools for the club, including hoes, buckets, rakes, plastic tarpaulin, string, and machete. Mr. Damulira and Michael led the first training in compost making. Michael and Isaac will travel to turn the compost pile during the school term break so it will be ready for May planting.

The school’s headmistress has invited Michael to lead monthly trainings in farming including planting irrigation and cultivation, has designated school land to build a 12-bed FAITH garden, and has approved club meeting times on Saturdays. With the promise of more trainings and experience to come, the club is an exciting example of cooperative experiential learning.