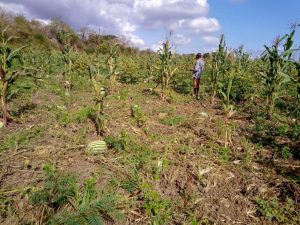 Earlier in the year Frank recieved a small loan to farm watermelons. Despite his best efforts, the crop suffered due to poor soil quality. Acting quickly, he allocated some of the funds to replant with corn to make up the potential loss of revenue.

Farming is a delicate process for individuals across the world. In Kinditwi it is even more delicate due to the harsh climate. Frank, KCM co-manager, began his year farming watermelons. He established a dedicated plan to ensure the crop’s survivability, but when he noticed challenges, he quickly reallocated some of his funds and invested in corn to save himself from a total loss.

By consistently checking his watermelon crop and adhering to his original protective farming plan (i.e., checking on the growth daily, observing the vines and roots, and guarding against pest), he was able to anticipate incoming challenges. He checked with some other farmers in the area and learned that they too were having issues. Acting quickly, Frank removed the diseased watermelons from the area and replanted it with corn. This single act will give his family something to look forward to rather than experiencing a potentially failed crop.

Families in Kinditwi are often battling against harsh conditions of the area. This year, the area saw flooding which took out many family farms. The challenge is trying to find suitable land to farm that will provide income and food for a family.

Frank is hopeful that he can start focusing on the business side of his pump. He’s looking for ways to attract customers for pumping water. Most recently he found someone willing to pay for his pumping services to fill a tank near a farming area.