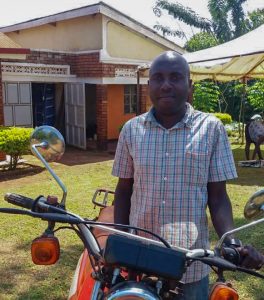 Michael Kiwanuka, the manager of Wamukisa Support Organization, periodically saves portions of his salary in order to invest in projects. He recently used his savings to install a water harvesting system at his house.

Michael has been Wamukisa’s manager since 2014 and wants to bring development to the Kikondo community. He does this is by testing out projects for himself. He has started his own family garden by his and his mother’s houses, raised pigs, and now he has invested in a rainwater harvesting system at his house.

The rainwater harvesting system is meant to collect precious rainfall off the roof of his house. Michael installed a system that will hold 6,500 Liters (1717 gallons) of rainwater. Based on the average rainfall of his home (average 61.5 inches per square foot per year) he should be able to fill the tank even in the drier months. This will save him time and money when the tank is full. Without collecting water, Michael has to transport jerry cans of water by motorbike. He plans to use the water for personal use, keeping livestock and extending his vegetable garden further into the dry season.

He is always looking for ways to add more value to his community and is sometimes challenged in doing so as some projects are not sustainable.

He hopes to transform his community with self-help projects which families can invest in with their community bank savings.