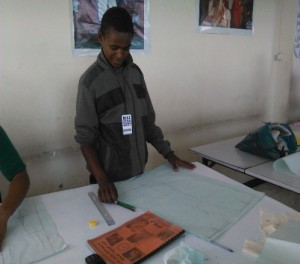 Zephaniah is completing the final stage of his vocational training with Retrak. He is studying tailoring and hopes to gain employment in one of the small garment factories Retrak has built relationships with. Since joining Retrak’s program, Zephaniah has also quit smoking and attended catch up classes for basic education.

Zephaniah is a 15-year-old boy. He was grew up in southern Ethiopia. Both of his parents are alive. He was in seventh grade when he dropped out of school due to economic hardship and an abusive father. His father was an alcoholic and abused Zephniah and Zephaniah’s mother. To get away from his father, Zephaniah left home and stayed on the streets of Addis Ababa for about one year.

During his time living on the streets he encountered challenges such as lack of food, nowhere to sleep, no personal hygiene facilities, physical abuse, and cold weather conditions. After living on the street for about a year, Retrak outreach workers found him and invited him to the Retrak Transition Center.

After he joined Retrak, Zephaniah received night shelter, breakfast, lunch, recreational and personal hygiene facilities, counseling, and life skills and catch-up education services. He was addicted to smoking cigarettes, but through consistent counseling at Retrak, he has stopped smoking.  He was also very focused in his catch-up classes at Retrak and had an interest in continuing his education. However, he worried about his father and his family’s economic hardship. He asked his counselor if he could join vocational training to learn tailoring so he could make money and help his mother.